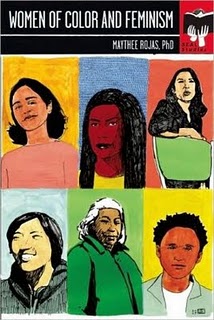 If many postmodern feminists would have it, colour or“race” wouldn’t be of primary concern in theorising oppression; a woman would be seen as much more than her race, class, and sexuality. In other words, every woman’s experience of oppression is nuanced, different. And if the postmodern approach is hugely popular and trounces other feminist methods of studying oppression, Women of Color and Feminism by Maythee Rojas would be rendered obsolete.

But it hasn’t, and that’s because we cannot get past race and the “assumptions based on our physical features [that] invariably work against our attempts at self-actualisation.” Thus the only way to gain some control over our lives as non-White women is by claiming politically-charged identities. In this, Rojas means ‘Women of Colour’.

Rojas expresses surprise that her students, who are mostly people of colour, do not identify with the term, but she doesn’t have to investigate too deeply to discover why: women of colour, as a group and in its use as terminology, have long been marginalised within academia. Learning about “Others” is reduced to courses on multiculturalism, and everywhere else, people are expected to be perceived as simply people. Rojas does not suggest, however, that the term is a loaded one, or one that has the political potency that feminist also has. Typically associated with the Black civil rights movement, “colored” can sound outdated and exclusive, and it’s unsurprising that not many, especially outside the cabal of feminist academia, take it up.

Women of Color and Feminism is interspersed with profiles of women and historical vignettes that readers are made to understand as inspirations for feminist consciousness in different ethnic communities in the United States. One cannot help but note a sense of tragedy that overhangs each profile. Anna Mae Pictau-Acquash, Saartjie Baartman, Korean camptown women, and Josefa Loaiza are all women whose lives have been marked by and remembered for the brutality inflicted on them because of the way they looked and where they came from.

Disco diva Donna Summers makes an unexpected appearance as the subject of Rojas’ analysis on the sexuality of women of colour. Known for her risque lyrics and sexy media persona, Summers’ 1970s career is projected as a kind of yardstick for how much women of colour, particularly Black women, have gained following the sexual revolution in the 1960s. It’s far from a ‘happily ever after’ of sexual autonomy and empowerment, Rojas notes, as everything the disco singer represented—in her music and image—was hugely complicit in reinforcing heterosexist ‘love’ and resurrecting the ghost of the Black Jezebel.

Rojas also covers a range of issues pertaining to the struggles of women of colour that are not usually associated with mainstream feminism. This includes reproductive rights as the right to remain fertile, as women of colour have been known to be sterilised against their will for numerous racist reasons, and the rights of incarcerated women to better health care in prison, protection from abuse behind bars, and better rehabilitation programmes.

The limitations I find in Rojas’ already expansive account is the omission of feminist work by women of colour whose goals are integrated within mainstream feminism’s agenda. This is important, especially in her final chapter on transnational feminism in which she stresses the key to feminism’s dynamism is the need for common links with other feminists to be established on a continual basis—not just with other women of colour, but with white women too. Women of Color and Feminism makes it clear that under the pressure of silence and marginalisation, more and more women of colour feel compelled to create narratives that represent their unique experiences through whatever means possible. Visual art, stand-up comedy, and blogs are the new, life-affirming sources of inspirations for feminists of colour, and not Rojas’ flawed selection of women of colour’s tragic lives.