I was in Jakarta for a quick three-day trip to attend the Women’s March last Saturday morning. The Women’s March was a moving carnival of hundreds of people; mostly young Indonesian women, a few genderqueer individuals, men, and some white people.

Is the Women’s March ‘Indonesian’ in spite of its name?

I’d say the Women’s March in Indonesia – an obvious embrace of the global movement that began as a US response to the election of Donald Trump – has a very Indonesian flavour. We marched from Sarinah to the president’s palace where protesters were dwarfed by the towering National Monument (Monas). The utilisation and subversion of local and nationalist symbols are evident throughout the rally. A young woman carried a poster that said, ‘Sri Kandi is LGBT’, a reference to the mythological female warrior Sri Kandi who is reimagined as a queer protest figure. The famed women’s rights activist Siti Musdah Mulia who spoke of a ‘reformist’ Islam and a country that is governed by no religion in particular recited, along with the crowd, the Pancasila. The Pancasila, or the state philosophy, was thus reclaimed by feminists and queers to hold the state to account. 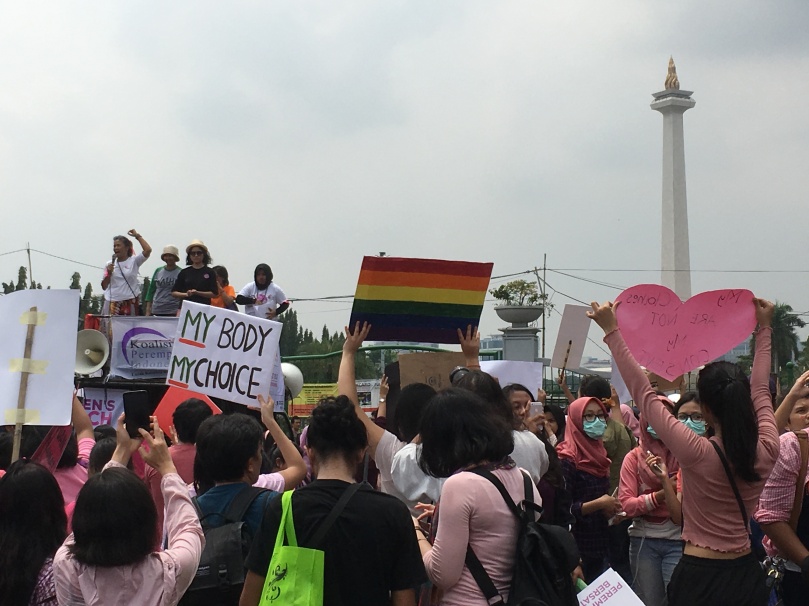 For years, I have had an affinity for feminism and the women’s movement in Indonesia, learning from them and understanding how they might compare with feminism in Malaysia and Singapore – something I have been observing for about five years now. In many ways, feminism in Indonesia departs significantly from its counterparts in Malaysia and Singapore in its distinct global-locality, an ability to remix local feminist discourses with transnational ones – Rosie the Riveter reimagined as the Acehnese anti-colonial warrior Tjoet Nya Dhien is a fine example. And so is the poster of Raden Ajeng Kartini if she was portrayed by Cath Kidston.

By contrast, there are fewer local and nationalistic symbols appropriated and subverted by Malaysian and Singaporean feminists. A more sedate and circumscribed approach identified by Lynette Chua as ‘pragmatic resistance’ is used to engage with the state in Singapore and Malaysia. Pragmatic resistance presents a bureaucratic-legal challenge against the the state that occurs mostly behind the court doors, with non-women’s/gay rights lawyers as mediating agents. At other times, feminism is a side show for ‘gender neutral’ political dissent. However necessary pragmatic resistance is, it is always to me like figuring out new dance moves within the confines of a telephone booth.

And so a ‘Women’s March’ is to take place in KL this coming Saturday and no doubt many young Malaysian women who have encountered the brilliant photos taken in Jakarta are excited to participate in their own march. However, I wonder how organised the Malaysian ‘women’s march’ is, what its demands are, and how it can make the march meaningful to many young Malaysian women and men beyond the dogma of old-school socialism.